We don’t have the written evidence about when the first Ballinacree football club was founded. One oral tradition says that it was affiliated in 1888 four years after the GAA was founded by Michael Cusack. In 1914 the team was known as St Patricks Ballinacree. Team colours were green. They played a tournament match against Granard in Finea. The report of that match gave the team as 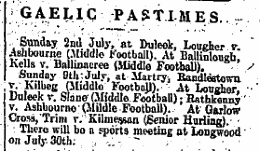 The team used travel to games in a four-wheel brake drawn by two horses.

In August 1915 in a tournament match to raise funds to clear the cost of the new hall, the played Castlepollard Gaels in a field given for the occasion by James N Hone. (now the field where Kit Lees house is situated. The hall was adjacent at the boundary wall with Browns)

The club appears to have broken up at that stage. Why did it come to an end? World War 1 was still raging. The battle of the Somme had just began with its many Irish casualties and following Easter 1916 the RIC were clamping down on National organisations such as the GAA. Many young men began to join political organizations. John Redmond’s offer of Volunteer services to the (British) government became a divisive issue, as did the debates about armed or peaceful struggle Marcus de Búrca, in his history of the GAA writes:

When it came to choosing between sport and politics it was not surprising that in the tense atmosphere of 1914 many members of the GAA gave preference to their Volunteer activities … With GAA members from rank-and-file level right up to the central council now in both rival Volunteer forces the danger of dissension in the ranks of the Association naturally increased.” (p 98/99).

We don’t know much about what debates were taking place in Ballinacree, Pat Brown (Rufus) who provided much of the background information for this section said that the club disbanded because of politics and police arrests. We can only guess at the exact causes of the break-up of the club.

An interesting article appeared in the Meath Chronicle of July 23rd 1927. The team were travelling to a tournament match in Ballinlough when the lorry in which they were travelling broke down at Millbrook. The article commends them, as they arrived at Ballinlough an hour late having travelled the rest of the way on foot in the broiling heat and in order not to disappoint the spectators played a friendly match. At half time they led 1 point to no score but were beaten by 5 points to 1.

The Meath Chronicle for 1929 gives us a little information about the team’s activities. The edition of 4 May lists, under GAA Items a Junior Football game for the following Sunday at Oldcastle: Ballinacree vs Ballinlough.
Referee M. Monaghan. Under the heading Football at Oldcastle it says: “At the Park on Sunday Ballinlough play Ballinacree in a Junior League. There will be a friendly between Granard and Oldcastle. Admission to the Park is free.” A further notice from Ballinlough GFC announces: “A ‘bus will be at Ballinlough on tomorrow Sunday and 12.30 (old time) to convey the team to Oldcastle.” The fixtures in the Chronicle of 8 June have Ballinacree vs Pluckstown at 2.00 pm in Ballinlough. The Chronicle of 22 June reported on this game, which was a curtain-raiser to the final of the Ballinlough Gold Medal Tournament between Carnaross and Munterconnaught.
“There was also what was expected to be an interesting League tie between Ballinacree and Pluckstown down for decision. The weather in the forenoon did not appear very promising but as the afternoon advanced it brightened up considerable and when the time came for the games the only real drawback was a slight wind. The pitch was in splendid condition, the grass was newly cut and nothing was left undone to make the sod worthy of the occasion and for this those responsible deserve every praise. There was but a small gathering present when the teams lined up for the League but as the game progressed the sidelines began to fill and it was obvious that the greater attraction was the final of the tournament. The League match was rather disappointing. Ballinacree, owing to unforeseen circumstances caused by a death, had to field a weakened team and proved no match for Pluckstown, the members of which team being in rare fettle, a result of vigorous training. The result was that Pluckstown ran out the winners on the score of 4 goals and 2 points to nil.

On 10 August the fixture for Ballinacree vs Moynalty at Ballinlough was announced; referee S. O’Fionn. This was to be followed by Carnaross vs Pluckstown. The 17 August Chronicle has no report of this game although it did have a brief item which said that Carnaross beat Pluckstown and that Mr Dick Gorman was an impartial referee. Some key information about what sealed the fate of the Ballinacree team and the club may lie in what the reporter decided not to say in a brief item, Last Sunday’s Games in the Chronicle of 7 September 1929: “At Ballinlough on Sunday Carnaross defeated Ballinacree in the Junior Divisional Football Final. Carnaross has an unbeaten record in its division and expect to be there or thereabouts when the county junior medals are being handed out.”

Ballinacree does not appear again in any fixtures lists for 1929. Apparently a robust dispute that went well beyond words took place in that match against Carnaross. The matter went to the County Board but no Ballinacree delegates were present at the meeting to defend their side of the story when the referee’s report was read . They were stoutly defended by a Ballinlough delegate who said they were as decent a bunch of lads as you’d find in the county. The Ballinacree version of events – had they been present, – would be that if the game had been properly refereed there would have been no trouble. The sentence was extraordinarily severe – the club was suspended for life. Many of the players joined the Castletown-Finea club after the suspension. Mattie Brown went to Dublin where he won two senior county finals with the Westerns club and he also played for Meath from 1930-33. Joe Brown and Jack Reilly played with Austin Stacks Club in Kerry. Perhaps some day a researcher will have access to the minutes of the Meath County Board meetings of September – December 1929 and find out the rest of the story.